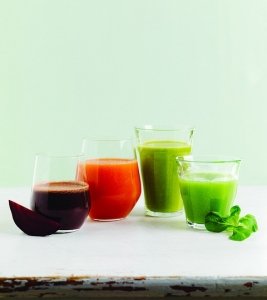 Liver function is a vital component of feeling well and flourishing in the toxic environment of the twentieth century. The liver is an extraordinarily hard working, all encompassing organ. It has been estimated that if we were to try to replicate all the known functions in a laboratory, the building would cover a site of over 30 square miles! The liver is the only internal human organ capable of natural regeneration of lost tissue; as little as 25% of a liver can regenerate into a whole liver. As such it is essential to support the liver with the right food and nutrients…

Having over 100 known functions, the livers main role is in detoxification of metabolites, hormones, drugs, chemicals, herbicides and pesticides, alcohol and many other substances. The liver facilitates food metabolism; bile production; stores many nutrients such as iron, copper, Vitamin E, D and A; plays a major role in blood health, produces antioxidants and assists immunological function. The liver also produces cholesterol and blood lipids(triglycerides).

The detoxification process is a highly complex and sophisticated system which can be divided into 2 parts – Phase I and Phase II liver detoxification. Active toxins enter the liver moving through the initial CYP 450 enzyme group creating new but altered toxins which now can be processed by the phase II pathways which almost work like a recycling plant, sure there is rubbish, but much of it can be recycled into useful bits and pieces or safely passed to be excreted by body.

For example, estrogen can be broken down along two optional pathways dependent upon available nutrients – one leading to healthy estrogen-2 hydroxy estrone, the other to a rather dangerous stimulatory metabolite called 16 alpha hydroxy estrone  – giving rise to excess estrogen problems such as fibroids, fibrocystic breast disease, breast cancer, fertility problems, cancer  and more. Cruciferous foods (broccoli etc) have been shown to be potent inducers of healthy estrogen metabolism. This is a great example of liver detoxification possibilities, and also an example of why certain medications can be greatly effected by alcohol and the like.

Nutrients to optimally support liver function are low reactive foods like rice and whey proteins as they are critical for supplying amino acids vital for detoxification enzymes, (these nutrients are essential to detoxification i.e. a detox program without protein will be toxic too you)…Eggs, garlic, onions and lecithin all provide excellent nutrition for the liver along with fish, beans, and nuts. Plant foods such as carrots, beetroots, watercress, broccoli along with the botanical medicines Green Tea, Turmeric, Golden Seal, St Marys Thistle (milk thistle), Bupluerum and others all contain nutrients that boost the activity of the liver in its many roles while supporting the metabolic wastes of the whole detoxification process.

Antiageing starts here at the liver, supply the right nutrients/ antioxidants, create the right hormones and you will reduce the ageing process…Mediherb have a new antiaging tablet – Phyto Regenex created specifically for this reason…Containing Resveratrol, Korean Ginseng, Milk Thistle, Pine bark and Ginkgo…The perfect blend of antioxidants, liver support and all round body tonic to extend your life and health… A great tablet made by Mediherbs’ owner Kerry Bone, specifically for himself.

Figures show nearly 1600 people were admitted to Queensland hospitals with paracetemol poisoning between 1995 – 1997. If patients survive the initial overdose, there is a strong risk of liver and kidney disease. In Europe and U.S. figures show more than 40% of people who overdose later die from liver failure! Sunday Mail 12/7/1998..Paracetemol is toxic, be careful of it with yourself and children…