Bacterium that have become highly resistant to antibiotics. 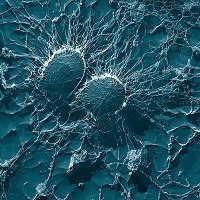 Bacterial resistance to antibiotics is growing day by day in both community and hospital settings, with a significant increase in infectious rates and death counts along with considerable financial burden to the government and community.

Superbugs are strains of bacteria that have developed a resistance to modern day antibiotics.  Resistance arises through one of three ways;

Resistance can appear spontaneously due to random mutations; or more commonly following gradual build up over time, or because of the misuse of antibiotics or antimicrobials.

The bacteria strains that have developed defences against the antibiotics used to kill them are known as the ESKAPE pathogens (Enterococcus faecium, Staphylococcus aureus, Klebsiella pneumoniae, Acinetobacter baumanii, Pseudomonas aeruginosa, and Enterobacteriaceae)

What can we do?

Infectious disease doctors have long warned of antibiotic resistance. Conventional antibiotics are getting progressively more ineffective as a consequence of resistance.  The need for new antibiotics still does not cover the increasing prevalence of antibiotic-resistant bacterial infections.

Luckily there are natural medicines and herbs that work against fighting these bacteria strains.  Andrographis,  Golden Seal, Echinacea & garlic are just some of the herbs we prescribe to patients to treat these infections, aswell as Elderberry which is found in many of our herbal teas that we have in our clinic.